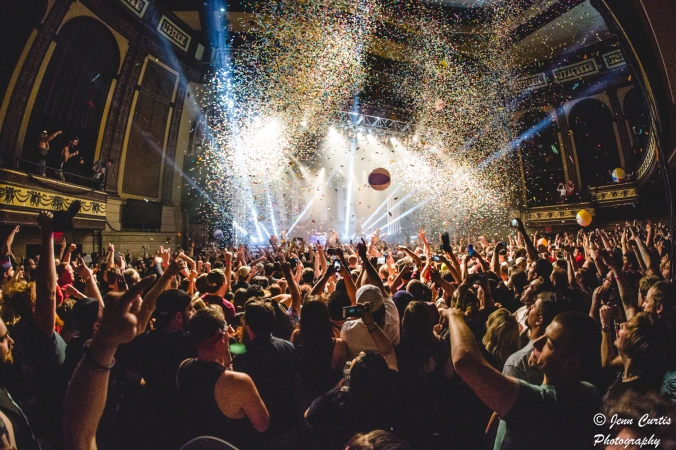 On Sunday night A Day to Remember (ADTR), along with stellar opening acts Parkway drive and State Champs, played a sold out show at The National in Richmond, a space with a well-known reputation for being one of the most enjoyable music venues in the state of Virginia. The interior of The National provides patrons with a satisfying combination of classical theater design with a modern edge, the perfect eclectic environment for one of rock’s biggest acts to take the stage. The energy and anticipation flowing throughout the space was apparent from the moment one arrived at the venue and viewed the sea of fans, many decked out in band shirts and other merchandise, forming a massive line that wrapped around the much of the venue.  The second that the doors opened, fans flooded into the venue and crowed eagerly around the stage on the first floor and trickled upstairs into the balcony seating.

The first act to take their crack at the energized crowd was State Champs, a group with roots in New York whose popularity and success has exploded in the past year. The five-piece band, who is signed with Pure Noise Records, brings a classic pop-punk style and widely enjoyable sound to the table with their music. Since their inception in 2010, State Champs has experienced both touring success in their opening slots with All Time Low, 5 Seconds of Summer, A Day to Remember and successful co-headliner with Neck Deep, in addition to commercial and chart success, with their 2013 debut full-length album The Finer Things, which debuted at #2 on the Billboard Heatseekers Albums chart. Their likeable style was paired seamlessly with the contagious energy, a rebellious spirit, and the perpetual motion that they brought to the stage during their opening set. 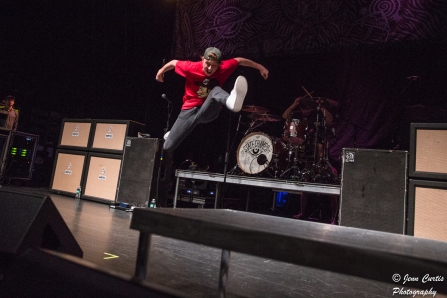 State Champs kicked off the show with a performance of “Breaking Ground,” a song from their 2015 album Around The World and Back. From the very first note, the most obvious thing about State Champs was how much they truly enjoy and appreciate playing live in front of their fans. They filled up he middle of their set with enthusiastic performances of their hit “Remedy” from their 2013 full length album The Finer Things, and several other tracks from Around the World and Back, including “Losing Myself,” “All You Are is History,” and “Secrets.” Each of these tracks showcased the band’s ability to create music that is incredibly enjoyable live, with lyrics that everyone can relate to. State Champs brought the words in each track to life on stage, with lead singer Derek DiScanio’s, distinctive vocals and the group’s irresistible driving spirit captivating the fans in attendance. One standout moment in State Champs’ set came when they played “Simple Existence,” an anthemic song from The Finer Things, that had fans singing the words back at the group from the first note. The band closed their set with one of their most popular tracks called “Elevated,” also from Finer Things. The song brought the energy in the building to a head, while leaving fans feeling elated and ready for the rest of the incredible music that was soon to come. It was obvious by the end of their set why State Champs is one of the hottest up and coming acts in pop-punk, and apparent that the group has earned the rising popularity they have enjoyed over the last year. 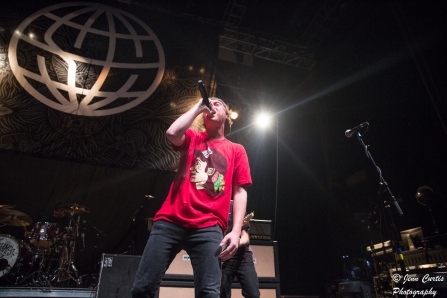 The next act to take the stage was Australian metalcore band Parkway Drive, a group that has seen an abundance of success since their formation in 2003. The band, known for their heavier metal sound and standout unclean vocals by their frontman Winston McCall, has four gold selling albums under their belts and a coveted spot on the roster of well-known music label Epitaph. Each member of the band had a theatric and charismatic stage presence. They kept a frenetic pace while onstage, delighting the crowd with head thrashing performances, frequent fan interaction, skillful instrumental work, and carefully crafted production elements. While onstage, the group was backed by a line of giant flashing lights that illuminated each member in varying shades of white, blue, red and yellow, occasionally creating an eerie silhouette effect.  Each element of Parkway Drive’s live performance blended together to create the perfect atmosphere for the capacity crowd, who was jumping around, moshing and crowd surfing for most of the set, to let loose and forget their troubles. The group also presented the crowd with a contrast in style from the opening State Champs. This element increases the target demographic of the tour by allowing fans who have a wide variety genre preferences to experience different styles of rock music each night on tour with each act that takes the stage to perform. 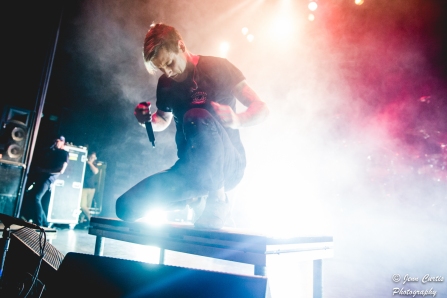 The band opened with a performance of “Destroyer,” which ironically is also the opening track from their 2015 album Ire, before following up with an older track called “Carrion,” from their 2007 album Horizons. Both tracks had the tone for Parkway Drive’s heavier style and featured stellar unclean vocals from McCall that had even fans in the balcony area up on their feet.   A standout moment in Parkway Drive’s set came when they performed a single from Ire called “Vice Grip,” which McCall described as an anthem meant to give people hope, and help them escape from the troubles that they face in their every day lives. The track itself is irresistible, with a genuine message that is utterly impossible not to relate to. The band’s emphatic performance had fans screaming every word, making it a surefire highlight of the night. Inspired renditions of “Bottom Feeder,” from Ire, and “Home Is for the Heartless,” from their 2010 album Deep Blue, kept the energy high throughout the middle portion of Parkway Drive’s set. The band closed their set in style with a theatric rendition of “Crushed,” another single from Ire that had the energy in the building reaching a fever pitch right in time for the final act. 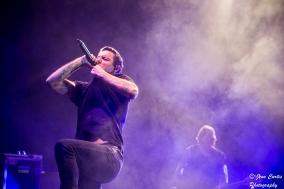 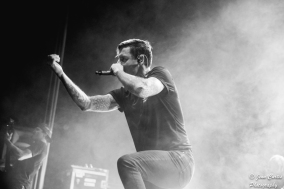 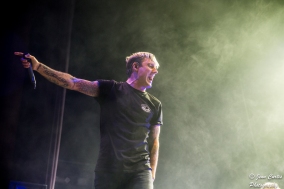 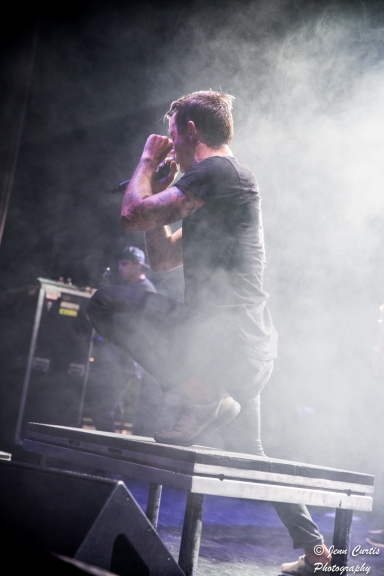 By the time the headlining A Day to Remember was preparing to take the stage, the fans, already thoroughly warmed up by State Champs and Parkway Drive, were in a state of frenzied anticipation. ADTR, who is unquestionably one of the pillars of their genre, expertly combine a rebellious pop-punk spirit with occasional heavier metal elements and arena rock choruses. They are adept at blending elements of metal, pop punk and arena rock to create a special sound of their own that has earned them thousands of fans, and an abundance of success since their inception in 2003. Soaring sing-a-long choruses, a combination of clean and unclean vocals, accentuated breakdown sections, thrashing guitars and fountains of energy are key features of the group’s style, while the energy they bring and devotion they inspire from their abundance of fans make their live shows must see events. Though there is a lot that makes ADTR special, what really sets the group apart is their versatility, which is highlighted by their ability to shift effortlessly between styles, sounds, vocal types, tempos and even genres. 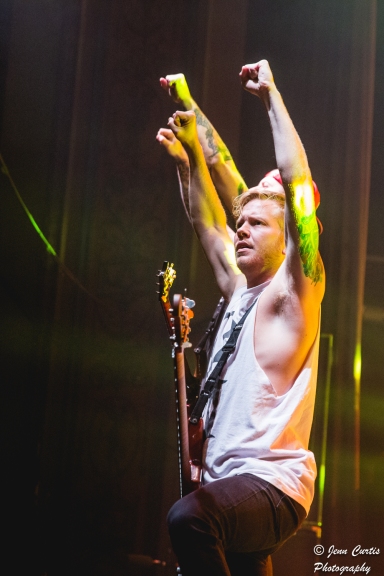 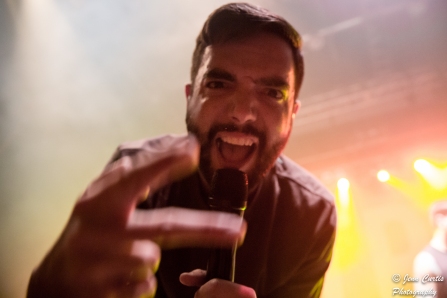 The band came out swinging and set the bar high for the remainder of the night with a thrilling performance of their hit “Downfall of Us All,” from their 2009 album Homesick, complete with confetti cannons bursting at the introduction, showering fans with mounds of colorful paper. Beach balls were also tossed into the crowd and subsequently were batted around by fans and kicked by band members throughout the entire set.  It was without question another highlight of an already unforgettable night. The front end of ADTR’s set was loaded with CO2 cannons and older fan favorite hits, including “My Life for Hire,” “I’m Mad of Wax, Larry, What Are You Made Of?,” “2nd Sucks,” and “Homesick.” These songs provided fans with prime sing-a-long material in both the choruses and the verses, in addition to thunderous breakdown sections that featured unclean vocals, and brought a heavier feel to the room, which inspired the formation of a circle pit and a surge of crowd surfers. The band padded the middle of their set with tracks from their 2013 album Common Courtesy: “Better Off This Way,” “Right Back At It Again,” and “Sometimes You’re the Hammer, Sometimes You’re the Nail.”

Another obvious highlight of ADTR’s set was their performance of their new song “Paranoia,” which featured billowing streams of CO2 firing from onstage cannons and a giant circle pit at the request of frontman Jeremy McKinnon. The song features yet another new style development for the band. It is tailor-made for a live setting and it effectively brought the house down in the middle of the band’s set. The band also made a point to add two songs to their 15-song set to bring the total number to 17. McKinnon explained that the change came about because a fan mentioned to them at the beginning of the tour that they hadn’t seen ADTR in eight years yet the groups still only played 15 songs as a headliner. One of the songs that they added was “It’s Complicated,” from their 2010 album What Separates Me From You,” while the other came towards the end of the show during the encore.

A Day to Remember played smash hit “All Signs Point to Lauderdale” before briefly exiting the stage. During the performance, crew members tossed rolls of toilet paper into the crowd, a surprisingly charming quirk that surely won’t be found at many other live shows. The band returned to the stage for a four-song encore after fans chanted vehemently for “one more song”. For the first song in the encore, ADTR gave a heartfelt acoustic performance of “If It Means a Lot to You,” that morphed into a full band event towards the end of the song. The track off their 2009 album Homesick, stood out because it is the only slow song from their entire set and because it consequently allowed lead singer Jeremy McKinnon’s beautiful clean vocals to rise to the forefront, unencumbered by heavy production or loud instruments. Also included in the encore was “All I Want,” from What Separates Me From You, and the second new setlist addition “Fast Forward to 2012,” from their 2007 album For Those Who Have Heart. A Day to Remember unsurprisingly closed their set with one of their most well-known and beloved hits, “A Plot to Bomb the Panhandle,” from For Those Who Have Heart. The song and performance ended the night of a high note and brought together all of the best elements of live musicianship. The song featured one last impressive production element when multi-colored streamers burst from the cannons on stage into the crowd.

By the end of the night, fans had been treated to an incredible night of music. From lighter pop-punk, to heavier metal, A Day to Remember, Parkway Drive, and State Champs each provided the crowd with varying styles of music to enjoy, giving the tour as a whole an element of versatility and a wide range of appeal. Each band made their own mark in Richmond and fans will undoubtedly be eagerly awaiting their return.