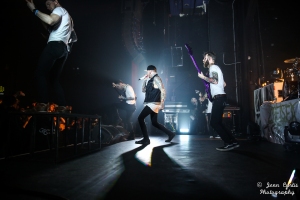 On March 14th, 2015 The Ashes to Ashes Tour with took the stage with The Family Ruin, Sworn In, Carnifex, and Chelsea Grin at Gramercy Theater. The show was incredible. The energy every band brought to the stage was amazing and the fans really responded.

First up, The Family Ruin played and opened with “Bring Out Your Dead” off their first full length release, Dearly Departed (2014). This is the perfect opening song as it starts with the repeating of “bring out your dead” until drummer Dom White, guitarists Craig Robinson and James Langely, bassist Josh Adamson and finally frontman Johnny Mennell take the stage and the music kicks in. They started out the night on a high note; they brought up the energy in the crowd and set the bar high for the following bands as any opening band should.  The band also performed “Leech”, “Let It Burn”, and “Battle For The Sun” off of Dearly Departed which always resonate well with the crowd. They always get the crowd engaged and involved regardless of whether or not they know the words.  The Family Ruin really had an incredible set with such amazing energy! Be sure to catch them when they return to the U.S. in a few weeks for the Family Reunion Tour alongside KBB label mates Scare Don’t Fear.

Next up, Sworn In took the stage. They continued to promote the great energy during the show playing songs like “Mindless” and “Snake Eyes” off their 2013 release, The Death Card. Sworn In really knows how to keep the crowd roaring. Fans also got a chance to hear a recent single, dropped in 2015, “Sunshine” off of their most recent release The Lovers/The Devil which was released on April 7th on Razor & Tie records.

The band then passed it off Carnifex. Vocalist Scott Lewis jumped all around the stage and brought all the energy that he could. The band preformed songs off their new album Die Without Hope, including  “Rotten Souls”, “Dark Days”, and “Die Without Hope”. The then went on to please the crowd with some of their older music, such as “Lie To My Face” off of their 2007 album Dead In My Arms.

Chelsea Grin took the stage last to a riled up crowd and continued to raise the energy and engagement all throughout their set. They kicked things off with “Playing With Fire” off their most recent release Ashes to Ashes (2014) on Artery Recordings. They also played fan favorites off of that record including “Angels Shall Sin, Demons Shall Pray” and “Pledge Allegiance”.  Although the band focused on their most recent album Ashes to Ashes they still played crowd favorites over different albums throughout the years including “Don’t Ask, Don’t Tell” off of Evolve (2012), “The Foolish One” off of My Damnation (2011) and “Crewcabanger” off of their 2008 Self Titled EP. They closed out their set with the ever popular “Clockwork” off of Ashes to Ashes. They returned to the stage with a bang to perform two amazing encore songs, “Cheyne Strokes” and “Recreant” off of Desolation of Eden (2010). The fans were certainly left with an incredible experience. Be sure to catch Chelsea Grin out on tour alongside The Word Alive on their co-headliner starting this month!

The entire show was incredible and the combination of these bands created a crazy and fun environment for their fans. The energy and talent was amazing at all points of the night.