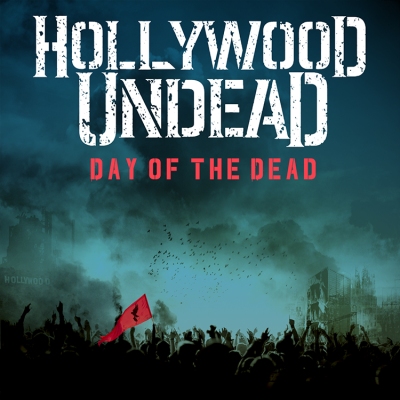 On March 31st, quintet Hollywood Undead released their fourth full-length album, Day of the Dead. Known for their unique metal sound with hip-hop undertones, they show off different styles and variations with this record. More in the style of their 2008 release, Swan Songs, the album channels that aggression and musical talent that engages their creativity. With a more diverse style on the record, it stands out, showing different abilities of the band.

The album opens with the fast-paced energetic, “Usual Suspects”. It immediately shows off their blend of heavy rock instrumentation, mixed with techno sounds. It is sure to become a fan favorite with it’s undeniably catchy melody, it’s hip-hop sound, and heavy rock undertones. The next track, “How We Roll”, opens with an instrumental to build you up to the energy of the song. The best part of the song is the chorus with it’s catchy anthem feel.  Though the chant in the middle of the song seems a tad out-of-place, it doesn’t take away too much from the quality of the song. The next song, “Day of the Dead”, is a very in depth, more aggressive song off the record. As a song dedicated to “everyone who eats, sleeps, and breathes Hollywood Undead”, it proves to be a better track off the album with it’s deep lyrics, and upbeat metal hip-hop blend.

“War Child”, the fourth track, kind of veers into the wrong direction. With the use of an access EDM sound, and a large amount of repetition, it makes the piece slightly distasteful. However, the next song, “Dark Places”, changes things once again. Opening with the winding of a clock, the song goes very lyrically in depth and are easily relatable to listeners. Though the last rap section of vocals are not as inviting as others, the song still works in their favor. For fans of Hollywood Undead’s first full-length album, Swan Songs, this is the track for you. The intensity of the piece, with the hurt and pain you feel from the vocals, make it easily one of the most well-done songs from the album. The album continues to go well as it leads into “Take Me Home”. It’s vocals to open are great, and as the most non-hip-hop track off the record, it stands out. It gives you a taste of all the clean vocals of the group; showing off their surprisingly warm, rich timbre, and enjoyable blend.

The next track entitled “Gravity”, has tremendous instrumentation throughout the piece. Though it may be lacking lyrically, it proves to be the song that best demonstrates the groups instrumental capabilities. “DEITWHTFD”, the next song, opens right off the bat with an extremely dark feel. The song standing for “Does Everybody In The World Have To Fucking Die”, can give you the impression it isn’t the most upbeat song off the album. With a very underground creepy feeling throughout with the chant in the middle of the song, some backwards vocals, and the sound of a gun cocking as the song progresses, make for it being very uninviting. If this song doesn’t give you some uncomfort, the next track opens with an ear shattering scream, that carries on throughout the song. “Disease”, though very well-composed lyrically, lacks a bit instrumentation wise. The album then goes into “Party By Myself”, a very upbeat track about, you guessed it, having a party by yourself. The cheerfulness of the song make it stand out, but it’s not the best of the tracks off the record. Inkeeping with the cheerful feel, the next song, “Live Forever” stays with a happy tone. Through the melody is a bit lacking than others, it’s lyrics are sure to be pleasing to listeners. The next song, “Save Me”, brings back up that quality Hollywood Undead sound. The blend of piano and guitar that play throughout the piece give it a dark, yet soothing feel; unlike any other track from the album. The melody is enjoyable and could lead to make this song a fan favorite.

The album then leads into the extremely distasteful, out-of-place, “Guzzle, Guzzle”. With the background beat sounds more inappropriate than usual, the song just gives off a very eerie distasteful vibe. If not uncomfortable enough, the whistling near the end of the song leave it very bitter. In a complete change of sound, the album then jumps into “I’ll Be There”, a cheery upbeat song which opens with sweet acoustic guitar chords and people clapping along to the beat. The harmonies in the song are divine, as long as the meaning of the song. The album comes to a close with “Let it Go”. The opening heavy guitar, hip-hop beats, and strings, show off the blend and balance of the groups instrumentation.

This record is one that shows off different styles of Hollywood Undead. It veers in different directions, and shows off more of a variety than their previous releases. From calmer in-depth lyrical pieces, to songs about booze-filled nights out in the town they love, Hollywood Undead will always find a way to surprise you and keep your attention.