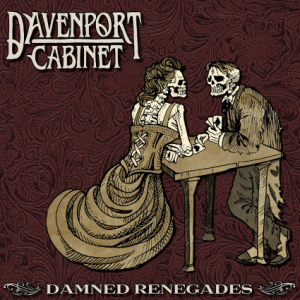 Davenport Cabinet released their third full-length album, Damned Renegades, with Equal Vision Records on September 30th of this year. Based in Warwick New York, Davenport Cabinet originally started as a solo project by Coheed and Cambria’s Travis Stever. With the addition of Tyler Klose (vocals and guitar), Tom Farkas (bass), and Michael Hickey (drums, percussion, and vocals) it evolved into a full band in 2007. The album shows off the band’s signature alternative folk, indie rock, and classic rock sounding style. To fans of Coheed with high expectations from Stever, this record does not disappoint.

The album opens with “41°15’22.0” N”, a minute long instrumental featuring guitars and violins. The softer-sounding instruments lead you right into “Everyone Surrounding”, a great start to the album with its powerful classical rock guitar sound and vocals. Right off the bat, you get a feel for the balance of rock with vocal harmonies and melodies. The next tracks, “Aneris” and “Bulldozer”, show off more of the alternative-folk- and indie-rock-sounding instrumentals throughout the songs. The tracks have a perfect blend of heavier instruments along with powerful rock vocals.

The album then slows down a bit with the softer “In Orbit”, a love song with a Travis Stever spin; the song has perfectly executed harmonies throughout with a folk-rock guitar sound in the background. The drums and guitar give the song an overall calm feeling and the guitar solo in the middle of the song puts you right at ease. The album then picks back up with “Sorry For Me”, whose instruments get heavier as the song progresses. The melodic chorus adds a different feel with the addition of the distorted background vocals. The jewel of the song is Stever’s guitar solo at the bridge which brings that classic rock sound back in. The album slows down again with another forty-second-long instrumental and then breaks into the fast-paced hard rock delight “Students of Disorder”. One of the better tracks off the album, Klose’s powerful vocals and Stever’s mind-blowing guitar solo midway through the song make this the perfect track for that classic rock sound you’ve been missing.

The album carries on with the somewhat out-of-place “Damned Renegades”, which with its finger picking guitar melody, detached vocals, and horn section sounds like the background music for an old Western gun fight. The not-so-great track becomes quickly forgiven, as it leads into the hard rock delight “Glass Balloon.” The “rock jewel” off this album, the harmonies of the vocals compliment perfectly with the rock sounding guitar, bass, and drums in the background. The song shows off the group’s understanding of melodic-sounding vocals with the vocal harmonies of each chorus. With the best instrumentation off the album, this track shows off Stever’s ability to still shred and leave you speechless.

The record slows down once again with “Missing Pieces”, another highlight off the album. When you’re in a mood for a slow-paced but melodic rock song, this is the perfect go-to. The song has a catchy alternative folk-rock guitar melody throughout, with Klose’s warm vocals to compliment. You then become entranced by the fading vocals, ending the song perfectly.

The album closes with “Graves of the Great War”, a seven-minute-long piece that will easily catch your attention. It starts with a softer, folk sound with the addition of a well-played piano melody. There then comes a few guitar solos to pick the song back up, but the instruments soften again soon after. After forty seconds of silence, all of a sudden, Hickey chimes in singing along to a completely different-sounding song. With perhaps a more upbeat sound, the song leaves you a bit confused, but wanting to hear more.

Davenport Cabinet have grown since their previous releases in ‘08 and ‘13 and have Damned Renegades to show how their mix of alternative folk and classic rock can work wonders. They are a band that should appeal to fans of Avenged Sevenfold, Thank You Scientist, and Coheed and Cambria.

Download “Glass Balloon” and “Missing Pieces”.
Rating: 4 out of 5 stars