Austin Kerr is best known for his role as the bassist in Set it Off, however, he is also a phenomenal writer and poet and released a book this year called “Dear Listener: I’m Breathing Are You”. 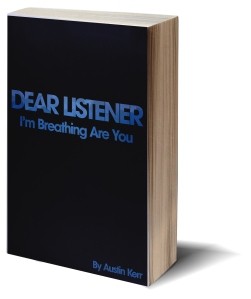 Kerr has been writing poetry since 2008; he was first inspired to write poetry when his girlfriend of the time started speaking to him about poetry. There could not have been a more romantic and appropriate reason for Kerr to start; his girlfriend was speaking to him about an incredibly talented poet and her interest in poetry so naturally he felt the desire to start writing poetry to impress his girl and win her heart all over again. He first started with a site titled “Now Tell Them That She’s Not Scared” after the lyrics of an Envy on the Cost song, however, this site was kept private and only visible by those Kerr chose to share it with. Kerr discovered his own love and passion for poetry which inspired him to continue on with poetry for years after. “Dear Listener” was started as his first publicly visible poetry-writing site in 2010. Kerr took a break from writing, as is normal for him because he goes in spurts of writing then won’t for an extended period of time. When he started writing again tumblr had become a major platform for writers, which led to the creation of Dear Listener 2.

Poetry is a fantastic outlet for many writers, Kerr included; when asked where he draws inspiration from he explained, “Generally down moments, when things feel very powerful and you cant get your head around a feeling or a notion. The way a moment embraced you, its can be a good way to let things out.”

Set it Off is also a major part of Kerr’s live. He is not the primary writer for the group however, there is a correlation between song writing and poetry for Kerr. In fact two of his poems were originally song lyrics that were converted to fit a more poetic tone. Within Set it Off he is someone to bounce ideas off of for lyrics when things don’t necessarily fit the way they were intended to. Among the group’s fanbase Kerr has been promoting his new poetry book, Dear Listener: I’m Breathing Are You?, and received great support. He would like to reach outside of the realm of music to a more traditional method of promoting a book. Touring has been extremely helpful to Dear Listener: I’m Breathing Are You? Prior to the book fans approached Kerr as a member of Set it Off, now things have changed a bit. Even on tour fans come up to him to speak about his book. “The cool part is having kids walk up at shows and having you sign it and saying how it’s helped them in some ways. It’s nice to have something that’s all me. It can be a nice difference talking about Set it Off things and this that’s Austin Kerr only.”

When asked where he hopes to go with poetry from here Kerr explained “I really want to do another book. I put it out hoping I would have enough time to put everything into before we put out Duality and all of that. I ended up very busy and didn’t get the time to put into book stuff. I want to start reaching out and get in touch with people in the book world and start doing more of that. I want the poetry to live on its own more, as a separate entity from Set it Off. “

He also had a message for fans of his writing, “Thank you to everyone, its really cool that people follow and read when I post stuff. I really suggest that when people have feelings they can’t deal with to put pen to paper. “ A poem that particularly stands out to Kerr is “Though It’s Made of Metal, the Basin, Cracks, Chips, and Breaks.” because it is the poem he has gotten the most release out of and yes, he did comment on the very Fall Out Boy- like title.

Be sure to grab his poetry book here either on Amazon or from Kerr on a stop of the Black Mass tour Set it Off will be on this fall! Also check out Kerr’s tumblr.