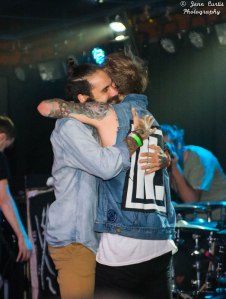 I had the opportunity to see Letlive and Architects on their co-headlining tour when they came to New York City with support from Glass Cloud and I the Mighty. Before the show I was quite interested to see what it would be like to have such a high-energy show in the Marlin Room in Webster Hall as there is no barricade. I knew there would be crowd surfing and stage diving as it comes with the territory with such groups but I was not expecting to see near the number of fans on stage as there ended up being all throughout the night. All four groups really got the crowd engaged and into the show from the minute they took the stage until the end of their last song.

I the Mighty Kicked off the night with a great set that fans seemed highly receptive of. Typically with an opening band there are minimal crowd surfers, if at all, and fans are singing but the crowd is relatively calm. This was not the case during I the Mighty’s set; not only were fans screaming along throughout the set to the majority of songs but there was a good deal of crowd surfing and stage diving going on the entire time. Frontman Brent Walsh was all over the stage, even stage diving out into the crowd on multiple occasions. It was quite clear that he, and the rest of the band, were having a blast on stage. Be sure to catch them on the second half of warped tour this summer starting at the Long Island date! 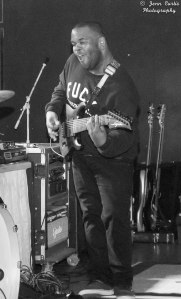 Glass Cloud took the stage next with an equally energetic and memorable set. Frontman Jerry Roush was had the crowd involved the entire set by constantly being at the front of the stage singing with them and leaning out above them. They too had a large number of crowd surfers and fans happily moshing along to the music. Prior to the show I’d never heard their music but after it will certainly be mixed among my Spotify playlists. They are a good band on an audio recording but a great live band because of their stage presence. Be on the look out for a summer tour announcement! 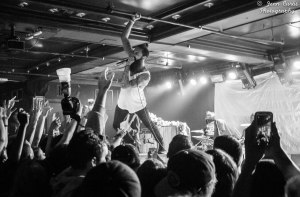 The time had come that so many had been waiting for; Letlive took the stage with a blast of energy and enthusiasm that like nothing I have seen before. The way the group, particularly frontman Jason Butler, can command a stage blew my expectations out of the water and I’d been hearing for weeks how crazy their sets were from fellow photographers. I remember reading about a Georgia venue cutting Letlive’s set short because of Butlers antics and even still I was not expecting the set they put on. Butler used every inch of the stage, hung from the pipe, and dove out into the crowd to get closer to fans. At some point there had to be at least twenty kids on stage with the band screaming their hearts out and having the time of their lives. Butler was not the only one in the group to engage the crowd, gutiarists Jean Nascimento and Jeff Sahyoun, and bassist Ryan Jay Johnson were out at the front of the stage with fans throughout the set. Not only does Letlive put on an unforgettable live performance but they are an incredibly humble group of individuals. Multiple times during the set Butler was visibly emotional and continuously thanked the crowd for everything they do and how grateful he is to them for the opportunities Letlive has been given. 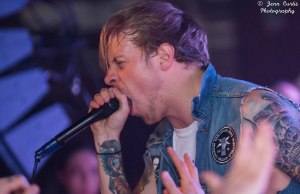 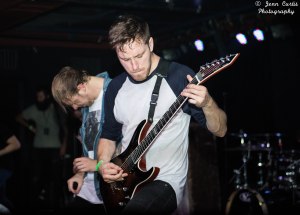 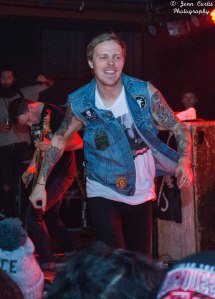 Architects finished off the night on a fantastic note. I’ll admit, I was quite surprised Letlive was not headlining the NYC stop of the tour but after seeing Architect’s performance it was clear that both bands put on headlining worthy sets. I figured after Letlive’s set no one would have any energy left because it seemed as if fans had gone all out but I was once again proven wrong; somehow it seemed as if the crowd got even rowdier with a significantly larger circle pit opening up for Architect’s set. They too caught me off guard as I had never heard their music prior to the show and I absolutely loved what I heard. They are an extremely talented group of musicians that know how to have a great time on stage and ensure the fans have a great time in the crowd (or on stage with them). 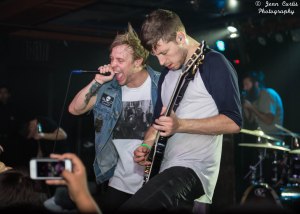 This show was the first one I’ve been to where every band significantly exceeded my expectations, and the bar was set pretty high going into the night. I’ve said this before but more often then not I do not love a set when I am not familiar with the band. However, I’m realizing more and more lately that some bands will just blow you away with their live performances regardless of how well you know the lyrics and you cannot help but have a great time. That was certainly the case Monday night at Architects and Letlive’s NYC show! If the tour has yet to come to your area be sure to catch it, you won’t regret it!