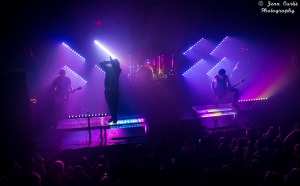 I had the awesome opportunity to catch the Red, White & Black tour at the Chance in Poughkeepsie last week and it was definitely an interesting show! Since the headliner I See Stars is a mix of electronic music and hardcore music the openers were mixed to fit both genres. Like Moths to Flames, Ghost Town and Trace Your Steps were all heavier bands and Razihel was a DJ who’s set felt like a rave with mosh. The crowd was mostly fans of the heavier music but they certainly got into each and every set. There were kids drop kicking one another and throwing front flips during the opening sets and things didn’t slow down after that! 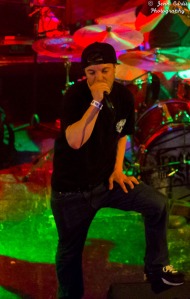 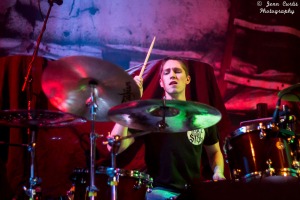 Trace your Steps was a local opener from Long Island, New York. The group put on a great set, getting fans engaged and into every song whether they knew the music or not. They even caught the attention of someone from pretty well-known band from the area and had fans approaching them all night about how much they enjoyed their set and rightfully so. These guys have a great stage presence and an equally impressive sound.

Ghost Town took the stage next and also put on a fantastic set. They too have a fantastic stage presence and are great at getting a crowed engaged and off their feet. Both times I have seen the group they have commanded the stage and put on a very enjoyable set.

Razihel was next and this is where things started to get a bit strange. Razihel is a DJ who mainly plays EDM music which did not fit with the rest of the heavier bands on the bill. This did not stop fans from having a great time during the set. Razihel had no problem calling for circle pits and moshing despite the difference in their sound from the normal music people mosh to. It was clear both fans and the group were having a great time.

Like Moths to Flames was the direct support band and the band that took the energy in the building to a new level. The group plays a fantastic set every night and are always very into the music they play. It is evident that they love what they’re doing and they want to make sure fans enjoy the set as much as they do. The group had a nice mix of new and older songs which seemed to be appreciated by the crowd.

I See Stars took the stage after outstanding performances from everyone before and put on an absolutely amazing show. Strobes and neon colored lights filled the venue as the group took the stage and throughout the set. It had the atmosphere of a rave with the crowd of a rock show and a fantastic mix of both on stage. Devin Oliver’s vocals were fantastic as was energy; he was all over the stage all night and onto the barricade to get even closer to fans. They are certainly a band to see for a fun night!

Every band on this tour puts on an extremely energetic and entertaining set, be sure to catch the Red, White, & Black tour when it comes to your city if it hasn’t been there yet. If you didn’t get to catch them this time around be sure to keep an eye out for future tours for all of the groups!